American Archives Month, held each October since 2006, gives archivists an opportunity to find creative ways to educate the public about the importance of archives. Many institutions kicked off the month by participating in #AskanArchivist Day on October 3. (Check out the ArchivesAWARE! recap of #AskanArchivist Day 2018 here). Throughout the remainder of the month, events, tours, exhibits, and other programs were held across the country with the goal of highlighting archival collections and their connections to local communities. In this post, we are featuring some of the American Archives Month activities to inspire and inform your plans for next October!

Archives Crawls are multi-repository tours that allow participants to visit several institutions throughout a day or month and become acquainted with the range of resources held by local cultural heritage institutions. Similarly, Archives Bazaars or Fairs bring together several institutions into a single space, allowing attendees to learn more about local archival resources.

Now in it’s third year, the Austin Archives Bazaar was held on October 28 and featured 26 area repositories. The event included a full slate of speakers (podcast hosts, PBS series creators, a PhD candidate, and a community organizer) who discussed how they had used archives in their work. An oral history booth, archival film screening, and a preservation station (where attendees could talk to professionals about the best way to preserve their photographs, scrapbooks, and other materials) were also included in the Bazaar.

The Border Regional Archives Group hosted their second annual Bazaar featuring 22 repositories from southern New Mexico, west Texas, and northern Mexico. Archivists, librarians, and curators were on hand to answer questions, short talks about regional history and genealogy were presented in English and Spanish, and scan stations were provided for digitization of family photographs and documents.

The 13th annual Los Angeles Archives Bazaar was held at the University of Southern California and included a full day of workshops and presentations including “Researching L.A. 101” which provided advice on getting started with archival research and a panel discussion with archivists and researchers on how archives can reveal hidden dimensions of California’s past. Archivists were on hand throughout the event to answer questions and talk to attendees about their collections.

Chicago Area Archivists presented Chicago Open Archives, a month-long opportunity for the public to visit repositories in the Chicago area. This year, the event was held in conjunction with the Illinois Bicentennial and highlighted items and collections focused on Illinois history. The Newberry Library, Chicago Public Library, the National Association of Realtors Archives, Chicago Film Archives, International Museum of Surgical Science, Chicago History Museum, and several area colleges and universities were among the participating institutions. 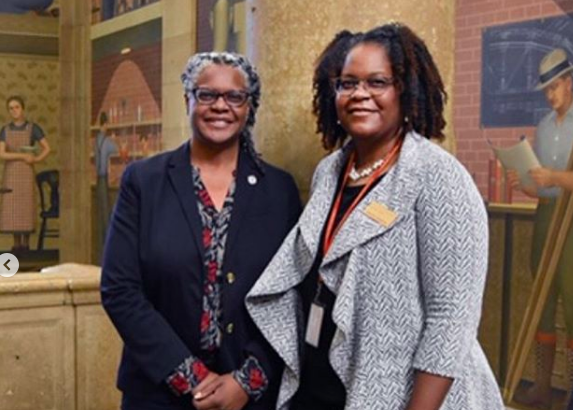 During American Archives Month, SAA President Meredith Evans spoke at the Ames Rotary and Iowa State University Library for the opening of Congressman Edward Mezvinsky’s Papers. Evans discussed each individual’s social responsibility and participation in the preservation of materials that reflect one’s life and heritage and the complexities and challenges of working with born-digital content.

The Western New York Library Resources Council focused on food throughout the month for their “Harvest of History” themed American Archives Month celebration. Presentations were held at different repositories and discussed how to preserve family recipes and how ingredients and cooking utensils have changed over time. The Council also gathered recipes for their Online Regional Cookbook.

On October 19, 50 staff members from the Office of Archives and Records in American Samoa’s Department of Administration Services participated in the 3rd annual Street Wave. Wearing bright Archives Month t-shirts and carrying signs saying “We are Made by History,” “Masina O Fa’amaumauga,” “Celebrate Our Archives Month,” and “Puipui Teuga Pepa,” participants were joined by local politicians in greeting morning commuters in Tafuna. Archivists in American Samoa also sponsored a poster contest for 6th-12th graders on the theme “Yesterday, Today, and Tomorrow” and held a “Night in the Archives” event on October 31.

The South Dakota State Archives hosted a Facebook photo scavenger hunt encouraging people to join in the conversation about local history. The Archives also held a History Trivia Night and an Escape the Archives event.

How did your institution participate in American Archives Month? Tell us about it in the comments or on Twitter using the hashtag #ArchivesAWARE!