A few months ago, a very fortunate event happened–my institution along with several others received a grant to digitize New Jersey newspapers from microfilm through the National Endowment for the Humanities National Digital Newspaper Program. Excited to get the word out, my library’s superb communications office put out a press release (if you’re not fortunate enough to have a communications office or are interested in more direct outreach to the media, see Erin Lawrimore’s excellent post, “Effective Media Relations for Your Archives”).

As the project director, I knew the story might result in the media wanting to talk to me, but, I still somehow felt caught a little off-guard when I learned that a local radio station, television station, and campus media outlets did indeed want to speak with me. I was more than slightly unnerved by the idea of going “on air,” but also feel it’s important that archivists get out there and talk about what makes their work so special. Although I haven’t done many interviews yet, my comfort-level is increasing.

Below are a few things I’ve picked up as I’ve started interviewing.

Also, be aware of ambient noises. For the radio interview, I had to make up for the air vent above my desk. I scheduled a television interview in a conference room with an adjacent office. Right after we finished, the office holder had an audible conversation. I’ve made a note to schedule another room or check in with the office holder for future interviews. 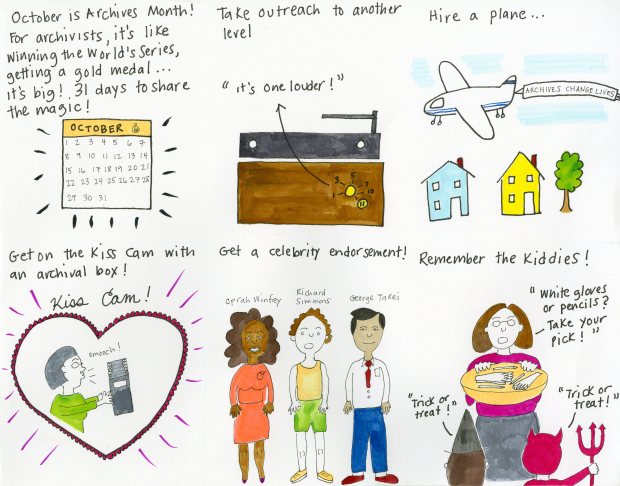 Beyond the Elevator is a cartoon strip created by Mandy Mastrovita and Jill Severn. The strip expresses their heartfelt belief that the magic of archives can and should be worked into ANY conversation or situation.  The prospect of this axiom has exhorted the two into paroxysms of giggles, chortles, and howls despite the sober and noble subject matter.  Indeed, they have spent hours cooking up likely scenarios to bring to life in future cartoons.  These little gems appear in ArchivesAWARE! on a monthly basis for the foreseeable future, or until they run out of ideas. Which is where you, the reader can help. Tell them your best stories about talking archives—the wilder, the weirder, the crazier; the better.  They will even take an elevator story if you make it good. To share your story, please send a description of your concept, relevant details, and contact information (your name and your email address) to beyondtheelevator@gmail.com.