This is the newest post in our There’s an Archivist for That! series, which features examples of archivists working in places you might not expect. COPA member Rachael Woody, owner of Rachael Cristine Consulting LLC, brings you an interview with Laura LaPlaca, the Director of Archives of the National Comedy Center.

Before her tenure as Director of Archives for the National Comedy Center in Jamestown, NY, Laura earned a PhD in Screen Cultures in the Department of Radio/TV/Film at Northwestern University. Her work focused on the early history of broadcasting in the United States, and particularly the development of the sitcom genre from the late 1920s to early 1960s. She also holds a master’s degree from Northwestern University’s Dept. of Radio/TV/Film, and bachelor’s degrees in Art History and English Literature from Pepperdine University. During her 10+ years as an archivist of popular culture and media, Laura has led or contributed to processing and preservation efforts at institutions including the Library of Congress, USC-Warner Brothers Archives, and Paley Center for Media. She founded the Northwestern University Radio Archive Project [NURAP] and has served on the boards of the Library of Congress Radio Preservation Task Force and Society for Cinema and Media Studies’ Television Studies Scholarly Interest Group. Her co-authored manuscript on the history of American comedy is forthcoming from Smithsonian Press.

RW: How did you get your gig at the National Comedy Center Archives?

I first visited Jamestown, NY – a beautiful historic community on the shore of Lake Chautauqua in Southwestern NY – on a grant-funded archival research trip while completing my doctoral dissertation on the history of the sitcom. Jamestown is the birthplace of the ground-breaking TV pioneer Lucille Ball, whose archives are housed by the Lucille Ball Desi Arnaz Museum, which tells the story of Ball and Arnaz’s influential Desilu Studios and celebrates their enduring cultural legacies. During my visit, I met Journey Gunderson, the Executive Director of the museum, who told me about her team’s ambitious efforts to execute Lucille Ball’s vision to build the first national-scale, non-profit educational institution devoted to comedy in her hometown. I knew moments after meeting Journey, and hearing about the remarkable energy, optimism, and goodwill that all of Jamestown was pouring into the National Comedy Center project, that I had to be involved. It turned out that the Comedy Center had yet to hire a Director of Archives & Research, and my particular background in the history of entertainment media and popular culture archives was a good match. I joined the team about 18 months before the 37,000-square-foot, $50-million-dollar National Comedy Center opened its doors in August 2018. Since opening, we’ve educated more than 100,000 guests from around the world about the history and art of comedy. We’ve been named one of Time’s “World’s Greatest Places,” voted “Best New Museum” by USA Today, and were designated by the United States Congress as our country’s official cultural institution devoted to preserving and presenting the vital story of comedy. But I am most proud of the fact that we have been so thoroughly embraced by the comedy community itself; knowing that the artists and creators we are celebrating find our work important is really the best metric of our success so far, and the thing that energizes me every day.

Q: Please tell us about the National Comedy Center Archives. 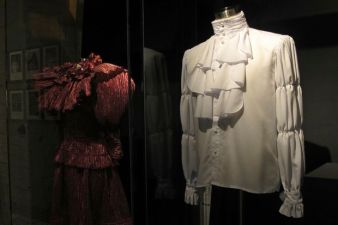 The National Comedy Center Archives collects materials that illuminate the comedic process, demonstrate the sociopolitical import of comedy history, and elevate comedy as an artform. We are committed, first and foremost, to providing access to collections. We always acquire, process, and preserve artifacts with exhibition and educational goals top of mind. To that end, the archives team works hand-in-hand everyday with staff in Guest Experiences, Education, Programming, and Technology to activate our collections for the public. The Comedy Center is comprised of more than 50 immersive exhibits that marshal cutting-edge technology and novel forms of interactive storytelling to communicate the story of comedy – very often via primary source archival materials. One of my primary roles as 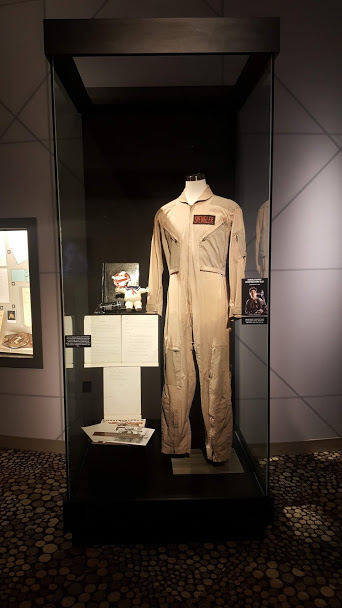 Director of Archives is curatorial: Where and how can archival materials illuminate history for our visitors? That sometimes takes the form of traditional artifact displays inside glass cases (the “Puffy Shirt” from Seinfeld, Harold Ramis’ Ghostbusters suit, Charlie Chaplin’s cane, or Joan Rivers’ joke notes). But, more often, involves activating digital surrogates of archival originals as part of interactive exhibits that involve touch screens, video walls, projections, or other technologically enhanced presentations. To share just one example, our visitors can take a seat at a Virtual Writer’s Desk and “page through” annotated script drafts from comedies like The Muppets, The Mary Tyler Moore Show, or A Funny Thing Happened on the Way to the Forum while the final-draft on-screen versions of the scenes play out beside them. In the past six weeks, due to the COVID-19 closures, we have moved a selection of our exhibit content to a digital platform that brings the museum direct to fans, students, and families around the world. You may enjoy exploring National Comedy Center Anywhere at anywhere.comedycenter.org. 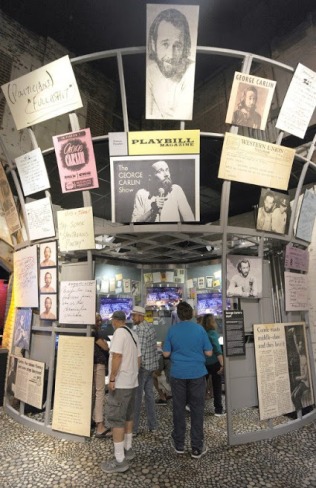 Our collections range across the history of comedy, from I Love Lucy to Saturday Night Live, from vaudeville to Internet humor, and across all comedy genres. I have three “favorite” collections: First, the 27,000-piece George Carlin Collection, which we have digitized and made available to visitors via an interactive interface in our galleries. The collection chronicles Carlin’s five-decade evolution as an artist, via his copious handwritten notes, day planners, audiovisual recordings, wardrobe, and more than 40 boxes of creative ephemera. The interactive exhibit showcases his meticulous process in detail, and allows our visitors an up-close look at the creative mind of one of the most influential artists of the 20th century. Second, the Rusty Warren Collection, and accompanying exhibit, honors the contributions of an important feminist comedic artist who levied her talents and brilliant wit to become a leading voice in the sexual revolution of the 1960s. Rusty Warren’s work was so progressive – and so feared – that she was banned from performing on television. Nevertheless, she toured cabarets and nightclubs for over thirty years and made 11 hugely popular comedy albums – 7 of which “went Gold.” Third, the Carl Reiner Collection – which is currently being processed – includes digitized 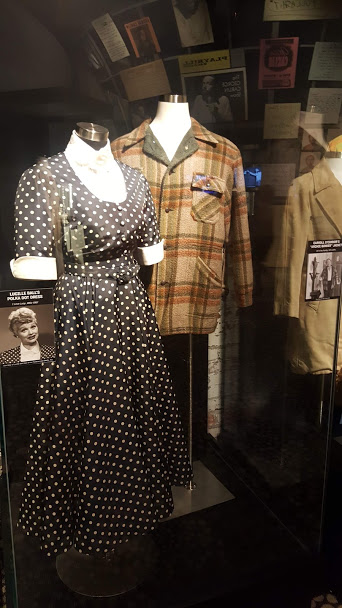 copies of every annotated draft page of the scripts for the seminal sitcom The Dick Van Dyke Show, which Reiner created and wrote. This series was an important pivot point in the history of American television, and set a high watermark that endures to this day. The chance to peer into Reiner’s process via these scripts is like taking a masterclass in the art of comedy writing. In addition to overseeing the processing and preservation of our rapidly-growing permanent collections, I also work closely with artists, estates, and industry partners to curate rotating exhibits of documents, props, and costumes that represent landmark moments in the history of comedy: Lenny Bruce’s trenchcoat, Harpo Marx’s wig, Lucille Ball’s polka dot dress, a “Dundie” from The Office, Carol Burnett’s charwoman costume, The Smothers Brothers’ guitar and bass, Andy Kaufman’s wrestling belt, Eddie Murphy’s Nutty Professor costume, the wedding dress from Bridesmaids, Weird Al Yankovic’s accordion, and so many more.

Q: What are some challenges unique to the collections?

The primary challenge that we contend with is the vastness and variability of comedy as a subject area. The Comedy Center celebrates comedy in all its forms – and across all eras. That approach requires safely housing, preserving, and conserving a broad range of multimedia artifacts, most of which were designed for one-time use on stage – not for decades of stable storage and exhibition. Our team routinely handles manuscripts, photographs, scrapbooks, and documents of all sorts…but also cares for 100-year-old fake mustaches, vaudeville broadsides, cartoonist’s palettes, Grammy Awards, a toupee, acetate discs, costume jewelry, a piano, several motor vehicles, a papier-mâché frog costume, paintings, undergarments, nitrate films, a miniature bicycle, a trick cello, a sledgehammer, and all manner of fragile, irregular, and – oftentimes – very funny objects.

Q: What is your favorite part of the job?

Part of my responsibility as the National Comedy Center’s Director of Archives is to work directly with artists and their estates to devise the best ways to engage, inspire, and entertain our visitors while educating them about the vital role that comedy has played in shaping our shared cultural heritage. I enjoy every opportunity I have to interact with artists: to discuss their work, to internalize their stories, to strategize together about how to preserve and celebrate their craft for generations to come. 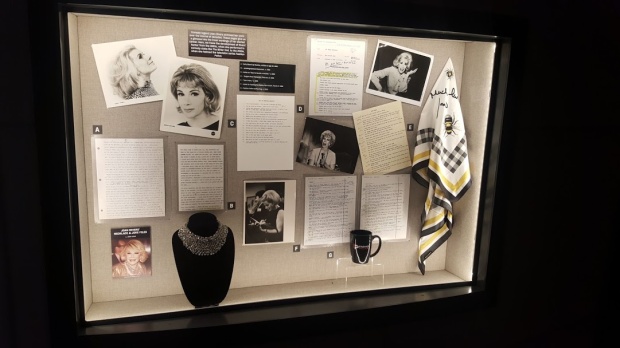