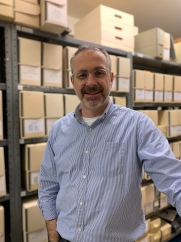 This is the newest post in our There’s an Archivist for That! series, which features examples of archivists working in places you might not expect. COPA member Anna Trammell brings you an interview with Mathew Brock, Library and Historical Collections Manager for the Mazama Library.

AT: How did you get your job?

MB: When the position was posted I was volunteering at the Oregon Historical Society in the research library. The then assistant director called me into her office and said, “You NEED to get this job!” At the time I was just out of library school having graduated in the spring of 2014 from the University of Washington’s iSchool. The application deadline was still a few weeks away, so with the help of my wife, I worked and reworked the application questions and did several mock interviews to practice my answers. I submitted my application and held my breath. A few days later I was called for an interview. The first interview was with a member of the staff and a few longtime library volunteers. I was called back later that day for a follow-up interview with the Executive Director. That interview went very well and the next day they offered me the position. In February of 2015, I was hired, part-time, as the first Mazama Library and Historical Collections Manager. I’ve since moved up to a full-time salaried position. 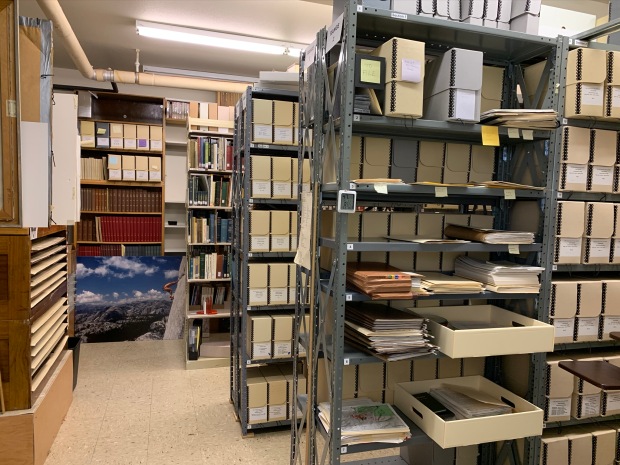 AT: Tell us about your organization.

MB: Founded on the summit of Mount Hood in 1894, the Mazamas is a non-profit mountaineering organization with a legacy of promoting the Northwest culture of exploration and stewardship of its mountain environments. The Mazamas leads over 700 hikes, and 350 climbs annually. It offers a variety of classes and activities for every skill and fitness level, all of which are open to both members and non-members. 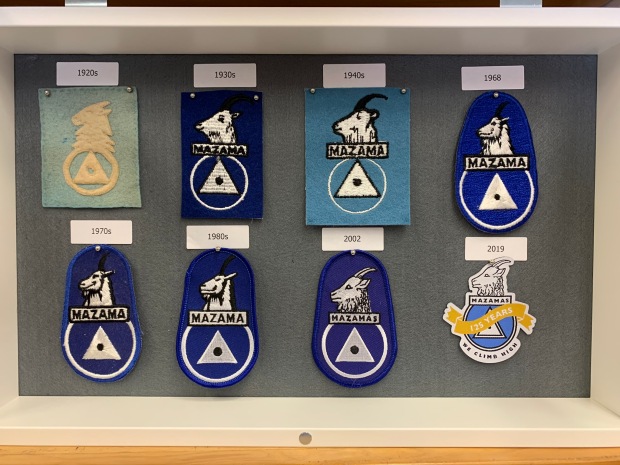 Capturing the history of this mountaineering legacy and providing a variety of contemporary resources for Mazamas members and the public is the aim of the Mazama Library and Historical Collections (LHC). In addition to a circulating library, established in 1915, the LHC contains a collection of climbing artifacts and an archival collection. It serves to make available a wide range of records that chronicle the history of the Mazamas and the organization’s place in Pacific Northwest outdoor recreation. Additionally, the LHC serves to document and preserve the actions and activities of the Mazamas committees, and past and current members. 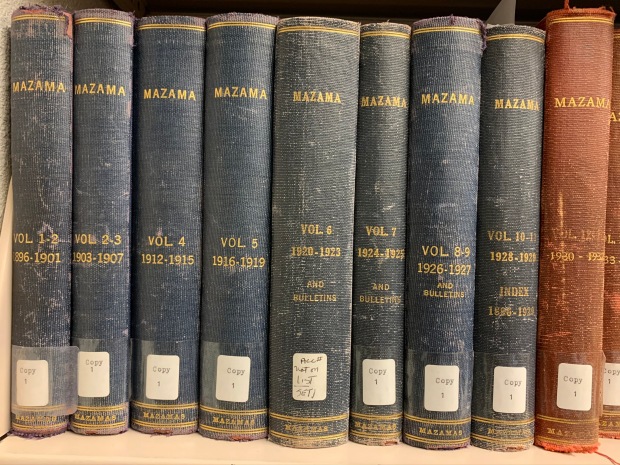 AT: Describe your collections.

The Mazama Library, one-third of the Mazama Library and Historical Collections is one of the few standalone mountaineering libraries operating in the United States today. Early photographs of the Mazama Clubrooms, as they were known then, reveal a small glass-fronted bookcase that showcased the first books in the Mazama Library. Over the next 105 years, the library acquired guidebooks, technical how-to titles, and rare books on mountaineering. Today, the library is significantly more extensive and strives to meet the varied needs of members, researchers, and the interested public.

Currently, the circulating collection contains over 7,500 volumes on mountaineering, climbing, bouldering, hiking, canyoneering, trekking, and other outdoor activities. Also, the library’s reference collection maintains full runs of all the major alpine journals and periodicals including the (British) Alpine Journal, the American Alpine Journal, Rock and Ice, Outside, and Backpacker, to name just a few. The library’s extensive biography section holds works by many prominent mountaineers including Sir Edmond Hillary, Lynn Hill, and Reinhold Messner. Rounding out the circulating collection is a small DVD library of mountaineering and climbing films, and a selection of oversized works highlighting climbs, climbers, and mountains from around the world. The collection development policy strives to add books that respond to three questions: How to do it? (technical guides), Where to do it? (guidebooks), and Who did it? (histories, biographies, and expedition accounts). To a lesser extent, the library strives to collect fiction and poetry works related to mountaineering and climbing. The Mazama Library’s non-circulating Special Collection contains rare mountaineering titles from around the world. Several notable books in the collection include a unique, turn-of-the-century copy of Scenes from the Snowfield by Edmund T. Coleman, a first edition of Search for the Apex of America by Anna Smith Peck, and To the Top of the Continent by Dr. Frederick Cook. 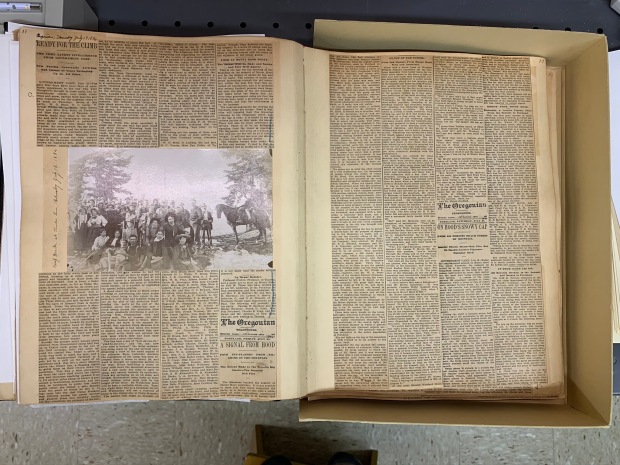 Scrapbook #7, William G. Steel Scrapbook Collections, showing articles from 1894 reporting on the founding of the Mazamas atop Mt Hood.

The archives contain not only Mazamas institutional records, but also preserved manuscripts, photographs, and other documents related to the Pacific Northwest’s history of mountaineering and climbing. A few of the more historically-important photograph collections include those of Mazamas founder William Gladstone Steel, early member Rodney L. Glisan, and the photographer Edward Curtis. William Steel, in addition to founding the Mazamas, was also the driving force behind the creation of Crater Lake National Park. His twenty-volume scrapbook collection, compiled from the late 1880s through the 1920s, details early mountaineering history of the Pacific Northwest, as well as his role in establishing first the Oregon Alpine Club and, after its demise, the Mazamas. 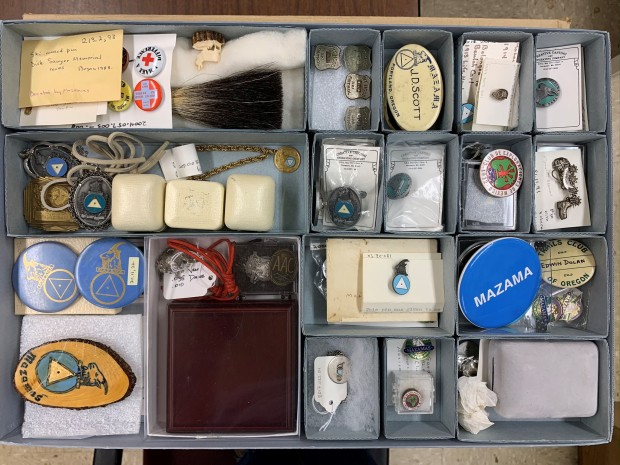 The Glisan Photographs Collection spans the 1910s through the late 1930s and documents a wide range of outdoor activities such as skiing, snowshoeing, and hiking, in addition to alpine mountaineering. Edward Curtis, known for his photographic and ethnographic work among American Indians, was also an early mountaineer and Mazamas member. The Mazamas own nearly fifty original Curtis prints that illustrate the Mazamas annual outings to Mount Rainier and Mount St. Helens in 1897 and 1898 respectively. In addition to capturing two early Mazama outings and climbs, the St. Helens collection contains what several specialists consider one of Curtis’ earliest photographs of Native Americans. Rounding out the important photograph collections is the C.E. Rusk Lantern Slide collection. Comprised of over four dozen slides, the collection recounts Rusk’s trip to Alaska and Mount McKinley to verify the first ascent claim of Dr. Fredrik Cook in 1912. 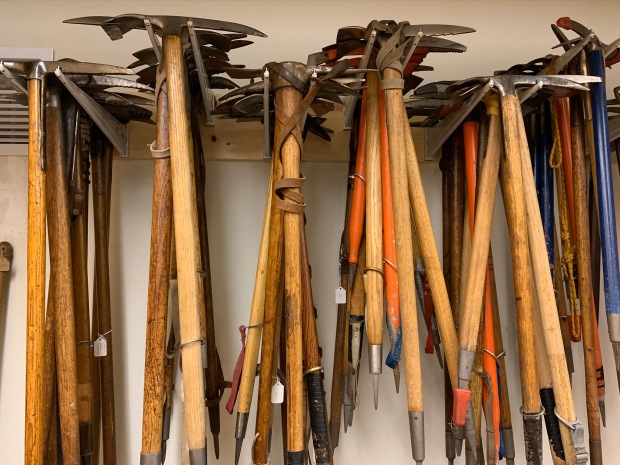 The two most used collections in the Mazama archives are the summit register and glacier research collections. For almost eighty years, the Mazamas managed the registers on the summits of all the principal peaks in the Northwest. The logs, many in custom made aluminum boxes designed and manufactured by the Mazamas, record the names of climbers and the date they reached the summit. Also, the registers encompass a wealth of observational data on the climate, geology, and glaciology of the mountains on which they resided. Beginning in 1895, the Mazamas undertook scientific research and observations of glaciers around the Northwest. The Mazamas were early pioneers of using aircraft to document glaciers and their movement. Covering roughly thirty years, this collection offers climate researchers a snapshot in time of the glaciers around the northwest. 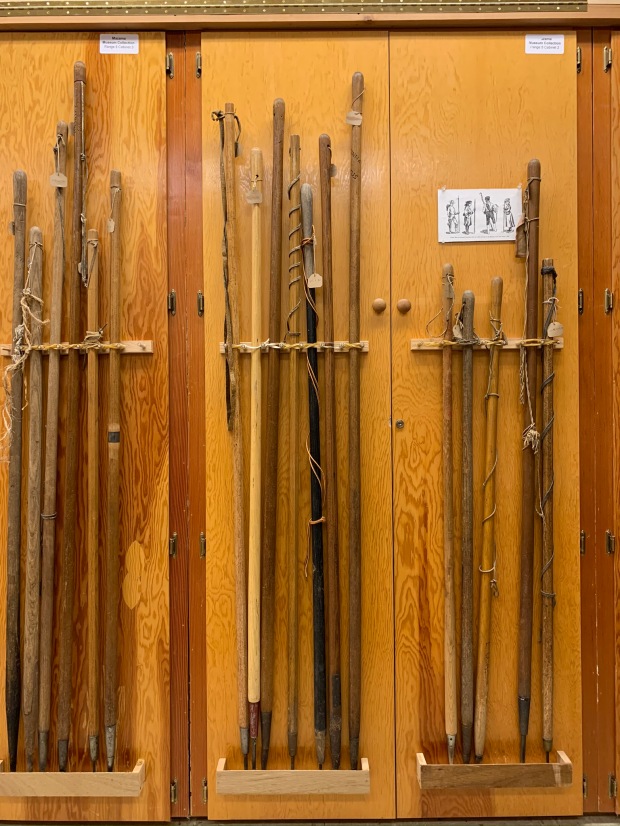 Begun in the early 1970s, the Mazama realia collection contains historic mountaineering gear from around the Northwest and the world. The collection was started by a longtime Mazama volunteer who noticed that material objects of historical value were being discarded and lost and thus took it upon herself to collect and save them. Over the last four decades, the collection has grown significantly, having amassed more than 8,000 objects.

Since the organization’s formation, Mazama members have made hundreds of first ascents on peaks and rock formations regionally and around the world. The realia collections include objects from those first ascents, including early hand-forged pitons, Army surplus carabiners, and the first set of crampons made in Oregon. The collection features not only items used on climbs but also unused gear in pristine condition, such as a Goldline climbing rope and a set of climbing shoes from the 1970s. With a primary focus on Mazama history, the collection contains the 125-year-old alpenstock used by founding member Frank Branch Riley on the Mazamas inaugural climb in 1894 and again during the 100th-anniversary climb in 1994. The collection also holds an ice ax once owned by Argentinian dictator Juan Peron, later given as a gift to Mazama member William Hackett. Objects from the collection are frequently on display at the Mazama Mountaineering Center and loaned out to other institutions for exhibits and shows. 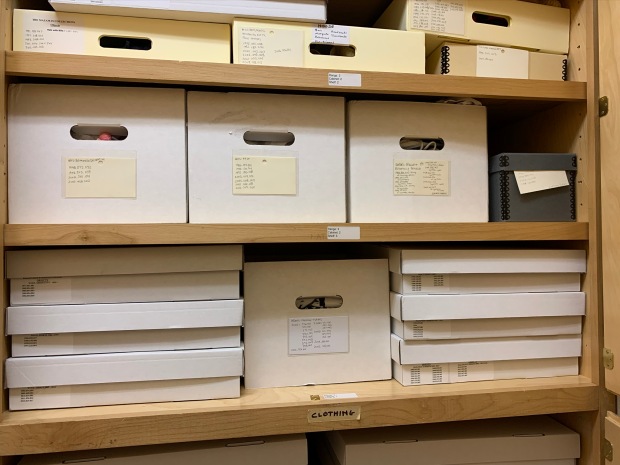 AT: What are some challenges unique to your collections?

MB: Awareness and accessibility are the two main challenges to our collections. When I was hired back in 2015 I think it was safe to say not many of our members knew about the library and historical collections, to say nothing of the public at large. Through a lot of outreach and awareness building that is slowly changing. More and more researchers, authors, and climbers are finding the collections and making use of the. 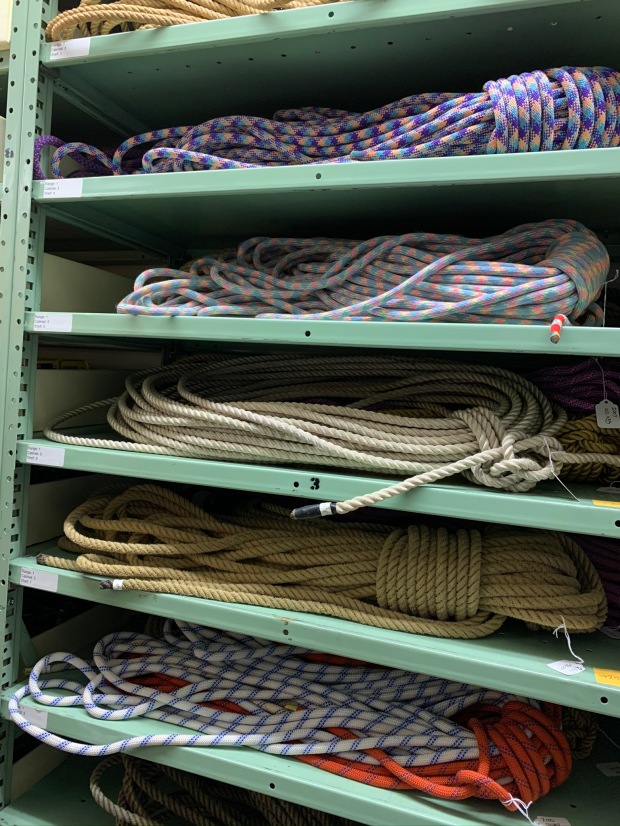 Access is another ongoing struggle. Putting the library catalog online in 2017 improved awareness and access to the library’s circulating and non-circulating collections. Access to the archives and realia collections is limited by missing or incomplete catalog records with spotty metadata. The largest request is for easy access to our extensive photograph collection, however, less than 10% of the collection has digital access copies. 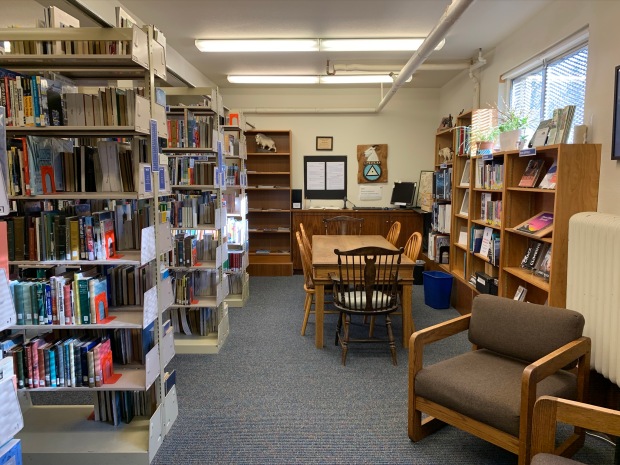 AT: What is your favorite part of your job?

MB: Every day I am amazed at the scope and depth of the collections.  While not a high alpine mountaineer myself, I enjoy hiking and rock climbing. I am astounded by the deep roots that Mazamas have in the history of Portland and the Pacific Northwest. From William Steel’s advocacy for Crater Lake National Park to Henry Pittock’s zeal for climbing, the Mazamas profound influence on our regional history is tangible. Each time I wander the stacks helping patrons, I encounter wonderfully obscure titles, many out of print or unique to this collection. I enjoy the opportunities I have to work with some of our earliest photograph collections. The images of women climbing in petticoats and men in suit jackets amaze me in their formality and inspire me to delve deeper to understand their motivations. Mostly, however, I am driven to come to work every day to help tell the story of this fantastic organization, its history, and its inspiring members.

Stay tuned for future posts in the “There’s an Archivist for That!” series, featuring stories on archivists working in places you might not expect. If you know of an archivist who fits this description or are yourself an archivist who fits this description, the editors would love to hear from you—share in the comments below or contact archivesaware@archivists.org to be interviewed for ArchivesAWARE!