My name is Jeremy Brett. I am an archivist/librarian, as well as one of the founders of the Concerned Archivists Alliance (CAA) and incidentally, a former employee of the National Archives and Records Administration.  The CAA is a group of information professionals, paraprofessionals, and information science students, committed to freedom of information, the protection of privacy rights, and to holding public officials accountable for their actions. We believe that a democratic society cannot thrive in an atmosphere of secrecy and oppression. Our group came into being as a response to the troubling 2016 election of Donald Trump and its implications for both the future of the American documentary record and the likely use (and misuse) of records under this administration to do harm to Americans.[1]

I’m writing this Responses & Retrospectives post in response to questions from some people about our group’s response to the recent scandal that took place with regard to the National Archives and Records Administration (NARA). On January 18th, the CAA published online an open letter to David Ferriero, the U.S. National Archivist, expressing our deep concern with the revelation that NARA had made multiple alterations to an image of the 2017 Women’s March, featured in its exhibit “Rightfully Hers: American Women and the Vote”. These alterations included the blurring of certain words on posters that referred to parts of the female anatomy, as well as that of the name of Donald Trump. Our original letter is found here. We invited our colleagues in the archival and other information professions to sign the letter in protest of this action. Gratifyingly, we have received more than 200 signatures to date.

As we noted in the letter, “Your explanation for this action, given by Archives’ spokeswoman Miriam Kleiman, is that ‘as a non-partisan, non-political federal agency, we blurred references to the President’s name on some posters, so as not to engage in current political controversy … Modifying the image was an attempt on our part to keep the focus on the records.’ This reasoning is offensive to the intellectual honesty and professional acumen of librarians and archivists across the country who collect, preserve, and make accessible to the public similarly sensitive material on a daily basis and without alteration or censorship.”

We of CAA stand behind that contention. Archivists owe an ethical and professional duty to the truth and to history, duties that NARA, with permission given at the highest levels of its administration, violated. We exist in a new and troubling political climate, where high government officials and media personalities alike feel free to shade the truth, to hide facts, and to lie outright to us, even in the face of evidence that proves the opposite. Therefore, it is more important than ever for archivists and archival institutions to nail their colors to the mast of truth and ensure that the materials they curate – as well as those materials’ public expression – are accurate, whole, and unaltered. Our letter pointed out that in altering the image, NARA had violated the Code of Ethics of the Society of American Archivists, which states “Archivists may not willfully alter, manipulate, or destroy data or records to conceal facts or distort evidence.” Although the Code is not legally binding, nor is NARA as an institution required to adhere to it, that Code serves as the ethical bedrock of the archival profession in the United States. We would have hoped that as the preeminent public archives in this nation, NARA might find itself inclined to align itself ethically with the rest of the American archival community. We are saddened to find out that apparently it disagrees. Instead, NARA chooses to stand by its self-definition as a “non-partisan, non-political federal agency”, even as it removes the name of Donald Trump from an historical image “so as not to engage in current political controversy.” This is not ethics and it is not professionalism. We believe, instead, that it is an instance of cowardice in the face of power at worst, incompetent thinking that fails to draw obvious conclusions at best.[2]

The same day that we published the letter, NARA announced in a public apology that the altered image would be removed. The apology (which can be read here) gave no explanation for NARA’s motives in altering the image in the first place, though it was careful to try and elude blame by noting that the image was not a NARA-held record but an image licensed for exhibit use. (As if, frankly, that made any ethical or moral difference.) The apology was, in our opinion, wholly inadequate and failed to address any of the reasons why the original action produced so much outrage in the archival and library communities.[3]

People have asked why we continued to offer our letter for signatures in light of NARA’s “apology”. We discussed whether to remove our letter from our site or at least whether to stop accepting signatories in the aftermath of NARA’s statement. We decided that it was important to stand by our original complaint. As archivists and information professionals, we believe that this was no mere mistake. We believe that the image alterations constituted an act of anticipatory obedience by NARA staff and administration, rendering invisible certain kinds of political speech in service to NARA’s political masters.[4] As one of CAA’s founders noted in a tweet[5]: 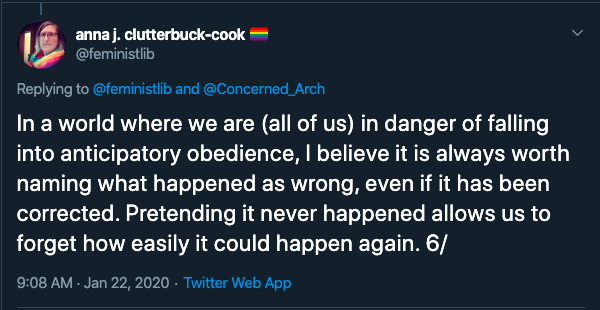 Apologies are not magic shields that protect one from one’s original error, nor are they erasers that instantly wipe away mistakes. We say that there is little that is more threatening to the future of our democracy than public servants who abandon our collective founding principles and their professional duties in order to curry favor or to head off possible criticism. That is what we believe happened with NARA in this case.

We have received some online pushback – some thoughtful, some less so – for both our original letter and our decision not to withdraw it after NARA’s “apology”. Without responding to any specific critic, we offer this explanation generally for our actions because we love our profession. We believe wholeheartedly in its vital importance to the nation in which we live. We believe passionately in our duty to ensure that voices are not silenced, that principles are not overturned in the name of either obedience to power or partisan politics, and that the people and communities we serve deserve a history that has not been altered.  We will not surrender those values.

On January 22nd, Ferriero issued a more substantive apology, in which he stressed that “this decision was made without any external direction whatsoever” and that “[w]e also wanted to avoid accusations of partisanship or complaints that we displayed inappropriate language in a family-friendly Federal museum.” Although this new apology certainly offers a fuller explanation, it still raises troublesome questions with which NARA and the archival community must grapple with going forward.

We believe this motive was short-sighted and, in fact, both an act of cowardice and a misunderstanding of NARA’s own mission. It’s hardly “partisanship” to show that a protest against an important political figure contained signage bearing that figure’s name. In fact, what IS partisanship, what IS taking sides, is to blur out that name, because to do so neutralizes a historical situation that was anything but neutral and downplays the public hostility against that figure. To do so only benefits Donald Trump himself. Ferriero later in the apology notes, “as a Federal agency serving the American public, we must incorporate non-partisanship into everything we do.” We would argue that NARA’s actual job as a servant of the American public is to present historical truth, regardless of how that truth makes particular politicians or parties appear.

Avoiding in advance “accusations of partisanship” is troubling in its own right. We worry that NARA was overly concerned about right-wing pushback – something that high government officials have weaponized in recent years – and was intimidated in advance into silencing women’s voices and rendering the image nonsensical by blurring out the name of the protest’s subject. If true, this is disquieting, and it is sad.

As for “inappropriate language”, one might argue whether references to female anatomy are profanities or offensive terms, rather than simple terminology. However, it alters the meaning and context of the protest being depicted by leaving those terms out; those terms were integral parts of the rhetoric being passionately expressed that day (as I can testify, having attended the Women’s March in Austin) and to blur them out removes that rhetoric. Personally, I would argue that NARA does families with children no favors by presenting them with a sanitized, “clean” version of history, rather than giving children the opportunity to ask questions – however troublesome – about what they see and read.

We agree that, yes, this decision certainly made it appear so. Because that is, in fact, what it actually did. Ferriero eludes the issue by claiming “our action made it appear as if we did not understand”, as if that wasn’t what actually happened.  In truth, NARA clearly did not understand its crucial charge, else it would not have made the decision to present an altered image. We find it worrisome that NARA administration seemed to have forgotten its ethical duty during this process.

At the same time, we do appreciate this expanded apology and explanation, and are gratified that NARA recognizes the need to thoroughly review its processes. It is our earnest hope that NARA going forward will live out the true meaning of its mission. NARA and its preservation of the archival record are crucial to ensuring a healthy, functioning democracy and an informed citizenry, and as archivists we want to support NARA in that all-important calling.

The philosopher Hannah Arendt wrote in the 1967 essay Truth and Politics that “[t]he chances of factual truth surviving the onslaught of power are very slim indeed; it is always in danger of being maneuvered out of the world not only for a time but, potentially, forever. Facts and events are infinitely more fragile things than axioms, discoveries, theories—even the most wildly speculative ones—produced by the human mind; they occur in the field of the ever-changing affairs of men, in whose flux there is nothing more permanent than the admittedly relative permanence of the human mind’s structure. Once they are lost, no rational effort will ever bring them back.” It is this we fear the most, and it is this that NARA risked with its alterations of the image on display. Let us all strive in our professional lives as archivists, all of us, to do better.

This post was written by Jeremy Brett, a founding member of the Concerned Archivists Alliance. The opinions and assertions stated within this piece are the author’s alone, and do not represent the official stance of the Society of American Archivists. COPA publishes response posts with the sole aim of providing additional perspectives, context, and information on current events and subjects that directly impact archives and archivists.

[1] In CAA matters, including this post, we all represent ourselves as individual archivists and our views are not necessarily those of our respective employing institutions.

[2] For a useful look at the implications of NARA’s action, Masha Gessen’s January 19th in The New Yorker is instructive: https://www.newyorker.com/news/our-columnists/the-erasure-of-political-history-at-the-national-archives-womens-march.

[3] For examples of this concern, note the January 19th statement issued by the Society of American Archivists (https://www2.archivists.org/news/2020/saa-statement-nara-exhibit-on-2017-womens-march-in-washington-dc) and the January 21st statement from the American Library Association (http://www.ala.org/news/press-releases/2020/01/ala-responds-national-archive-efforts-alter-materials).

[4] We note the incredible irony in NARA choosing to obscure the protest language and outrage of women, in an exhibit devoted to and celebrating the struggle of women to secure the right to vote.

3 thoughts on “Responses and Retrospectives: Jeremy Brett of the Concerned Archivists Alliance on the Altered Photo for NARA’s Exhibit “Rightfully Hers,” and the Subsequent NARA Apologies”