This post is part of our new Archives + Audiences series, which features the perspectives of archival audiences – scholars, journalists, filmmakers, artists, activists, and more – for whom archives have been an important part of their life and work. 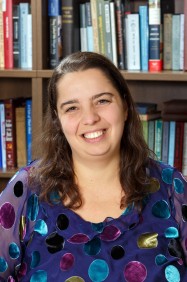 In this Archives + Audiences entry, we bring you an interview with Anna Shternshis, Associate Professor of Yiddish and Diaspora Studies at the University of Toronto, on her experience researching a collection of song lyrics by amateur Jewish authors in the Soviet Union during World War II.  Originally collected by Soviet ethnomusicologists toward the end of the war, the song lyrics collection is now housed at the Vernadsky National Library of Ukraine.  Shternshis’s work with the collection helped produce the recently released album Yiddish Glory: The Lost Songs of World War II (Six Degrees Records), in which select songs have been reconstructed and performed by professional musicians.

Shternshis is the author of Soviet and Kosher: Jewish Popular Culture in the Soviet Union, 1923 – 1939 (Bloomington: Indiana University Press, 2006) and When Sonia Met Boris: An Oral History of Jewish Life under Stalin (New York: Oxford University Press, 2017). She is the author of over 20 articles on the Soviet Jews during World War II, Russian Jewish culture and post-Soviet Jewish diaspora. Together with David Shneer, Shternshis co-edits East European Jewish Affairs, the leading journal in the field of East European Jewish Studies.

ArchivesAWARE: What was it like to work with the collection of Jewish song lyrics at the Vernadsky National Library?  Did anything in the collection surprise you, or were there any “a-ha” moments?

Shternshis: The work of a historian consists of many hours of monotonous research, and this project is not an exception. But when I really began analyzing the lyrics of these Yiddish songs, and understood that these were grassroots accounts of Nazi atrocities that had been set to music, and that none of these songs had been known before, emotions took over. I felt excited about reading these materials, and strongly moved by the lyrics. Above all, I felt enormous gratitude to Moisei Beregovsky and his colleagues, Soviet ethnomusicologists of the 1940s, who spent years collecting these unique materials.  They were arrested by Stalin’s government for doing so, and died thinking their work was lost to history without any recognition for what they had done. I felt professional solidarity with these people, who, of course, I have never met.

I was struck both by the magnitude of this finding, and by the fact that all these songs told stories of people who we rarely get to hear from. In the context of writing history, we often hear people’s voices as “interpreted” as opposed to given a platform, and I was determined to do something about it. In many ways, these songs represented the range of experiences of Jews in the Soviet Union during the war:  the stories of the 440,000 who served in the Red Army and the 1.4 million who managed to survive through a harrowing evacuation to the Soviet Rear, and they also were actual testimonies of those who were killed in the Holocaust.  Of the 6 million who were killed, more than 2.5 million Jews were murdered in Nazi-occupied parts of the Soviet Union, and we learned that, some of the last things people did, was to write songs to document the horrors they witnessed.

ArchivesAWARE: Was there something you were hoping to find in the collection but didn’t?

Shternshis: While the discovery of this collection has often been described as an incredible “needle in a haystack”, and the songs indeed change our understanding of the Holocaust in the Soviet Union, especially Jewish resistance to fascism, I didn’t begin the project by hoping to find, prove or disprove a certain idea, and in the end, the songs led to many new findings about Jewish life in the Soviet Union during World War II.

One definite thing that we have learned from these materials is that Jews sang in Yiddish in the Soviet Union during the war, and that they forgot all about doing so decades later. When I started looking at these documents, I was in the middle of a related project, on Jewish oral histories of Stalin’s Soviet Union, and interviewed almost 500 people from the generation of Soviet Jews born in the early 1920s, and not a single one of them could remember of a Yiddish song depicting the war. This material means that history and memory tell different stories of the war. Without these materials we would not have known that.

The second finding is that Soviet soldiers, some of them amateur authors, continued to create in Yiddish during combat. We knew that Yiddish culture survived in the Soviet Rear, but we did not know about the soldiers. This is an important insight of how Jews made sense of these events during the war.

Third, these songs give us a chance to learn about how children and women, who authored a majority of these songs, used music to make sense of their experiences.  There are songs written by orphans, one by a 10-year old whose mother was murdered in the Holocaust.  There are songs written by women serving in the army, women working in factories to support the war effort. The songs give us an opportunity to hear their direct voices, something that rarely happens in the context of historical research.

ArchivesAWARE: Did you encounter many barriers to accessing or using the collection?

Shternshis: No, the collection is in the open access in the Vernadsky Ukrainian National Library in Kiev.

The biggest barrier was the condition of the documents (through no fault of the library).  Many were hand written on scraps of paper during the war, and after more than seven decades, the handwriting wasn’t always clear.  Some of the songs had been typed up just after the war by the ethnomusicologists who collected them as they were preparing to publish a book about Yiddish folk songs describing the horrors of the war, and resistance to fascism, but they had used a very poor typewriter, and many of the Yiddish letters were quite difficult to decipher.

ArchivesAWARE: How did the Yiddish Glory album come about?

Shternshis: To be honest, choosing to do an album was not my first instinct. I wanted to publish a book, an academic monograph, maybe a website, and only then do some sort of multi-media. But I was planning a conference at the University of Toronto about Yiddish culture during World War II, and I asked Dr. Pavel Lion (better known by his artistic name, Psoy Korolenko), to help me with the presentation. We selected a few songs for Psoy to reconstruct. After that, Dan Rosenberg, a music producer who was at the event, encouraged us to record the songs with a larger group of musicians. He invited Sergei Erdenko, an amazing Russian violinist, who created arrangements for the songs based on the melodies that Psoy selected. Erdenko and his band “Loyko”, which also includes another violinist, Artur Gorbenko and guitarist Mikhail Savichev, flew to Toronto from Russia to record the CD.  They were joined by Psoy, Sophie Milman, a Juno-award winning Canadian Jazz singer and four acclaimed local musicians who all participated in this project because they believed in the historical significance of these materials, and were generous to use their talents to make this music shine.

Eventually, after three years of work, this project resulted in Yiddish Glory.  I am still working on an academic monograph that will incorporate these songs as well as a website.

ArchivesAWARE: How did you go about selecting the songs to be included on the album, and how were the melodies for these songs written?

Shternshis: Singer Psoy Korolenko and I selected songs that would give voice to the amateur authors of various backgrounds – women, children, soldiers, refugees – who composed music and poetry under the most difficult circumstances, and therefore provided some of the first testimonies of what it was like to live in the Soviet Union during World War II. Each individual composition has its own story, and together, these songs reveal a collective history of an entire generation, they provide an artistic comment on the Jewish experience in the Soviet Union during World War II.  Each song was chosen because its lyrics conveyed a unique, often under-discussed historical experience, such as life and survival in the Tulchin ghetto or in the Pechora camp, serving in the Red Army, working on the Soviet home front or fighting as a partisan.

Many songs came as texts only, sometimes unfinished or even without beginnings.  A few actually had their melodies as well, including “My Mother’s Grave,” a song written by a 10-year old orphan after his mother was killed during the Holocaust, and “Chuvasher Tekhter,” a piece that describes how women served in the Red Army to fight against fascism.

For the vast majority, Psoy Korolenko had to reconstruct the melodies for many of the rest of the songs.  After closely examining the lyrics, he realized that most were actually based on popular songs at the time.  He also carefully considered the context of when the songs were created, and also about how today’s audiences would react to this music. We did not want to resurrect these songs and treat them as archival rarities. We wanted people to listen to them, think about history and also enjoy the music.

ArchivesAWARE: Is there anything else you would like to share about the process of creating the Yiddish Glory album?

Shternshis: Another motivation for all of us involved in the project was because the fight against fascism, racism, bigotry and antisemitism is timely. Unfortunately, violence and wars did not disappear in the 21st century either. Women and children are often the first, and the least noticeable victims of it. The songs alert us to the dangers of wars and who suffers from it most.

Enjoy clips of the songs from Yiddish Glory: The Lost Songs of World War II with this Spotify playlist: https://open.spotify.com/embed?uri=spotify%3Aalbum%3A0V79cdGu4uahpLh48vEoGr