This post was authored by guest contributor Meredith E. Torre, Archivist at the Atlanta Housing Authority.

To celebrate October’s Archives month, the Atlanta Housing Authority (AHA) Archives recently launched a historically themed Pokémon scavenger hunt. The game was designed to celebrate some of the important people who have contributed to AHA’s history.

This outreach activity was great at eliciting responsive participation, generating conversation, and demonstrating some of the papers and records the AHA Archives holds for people valuable to our history. 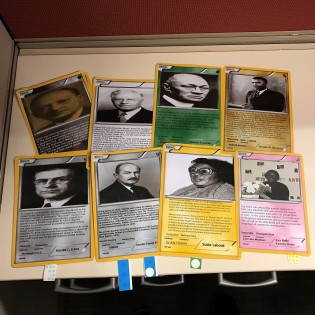 The fabrication of the game was fairly simple. The game was created entirely out of paper “Pokémon” cards, with corresponding stickers (to show how rare or common that particular Pokémon was) attached to the Pokémon, and a Pokéball or scorecard. Because the game was setup like a scavenger hunt and the score card resembled a bingo card, no knowledge of the actual Pokémon game was necessary to play the game.

The Pokémon cards consisted of biographical information for persons who are a significant part of AHA’s history—Charles F. Palmer, Dr. John Hope, Harold L. Ickes, Jesse Blayton, Clark Howell, and President Roosevelt, just to name a few—and corresponding stickers. These Pokémon were posted throughout AHA’s building. The object of the game was to locate the Pokémon (the person of historical significance) and to “catch” the Pokémon by placing the corresponding sticker onto a scorecard or your Pokéball. In the actual game of Pokémon, some Pokémon are common and some are rarer than others. We printed out less Pokémon cards for those person in our history we identified as already familiar and made them “rare”. On the contrary, we printed out more Pokémon cards for those persons perhaps less familiar and placed them in more prominent places to make them “common” and to give them more exposure. 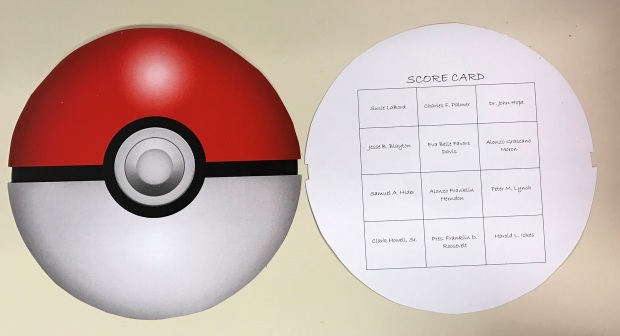 In creating the game, there are lots of Pokémon templates online to choose from. We selected a blank card template created by artist Christian England (LevelInfinitum) on Deviant Art to create our Pokémon cards and edited the images using Pixlr. We created our scorecards as a Word document and printed an image of a Pokéball on the opposite side.

We announced the Pokémon activity and posted the rules with scorecards in centralized locations. We held the game for a period of one week. There was a lot of enthusiasm for the activity and people said in hunting for the Pokémon that they really enjoyed discovering the people who make up a part of AHA’s history and learning things about them they may have not known! 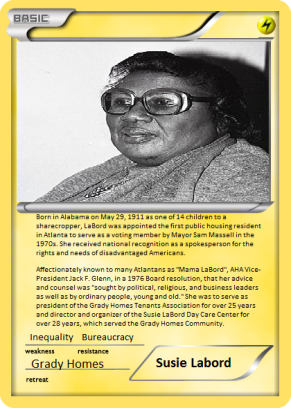 This outreach activity was easy to coordinate, super fun, and is also easily customizable for your institution!

Have you developed an innovative outreach program at your repository? If so, please share in the comments below or contact archivesaware@archivists.org to be a guest contributor to ArchivesAWARE!